Via Salis is the name of the first PPP (Public Private Partnership) project in the Czech Republic. The name aims to remind that the motorway, which is to be built within this project, copies part of the important trade route which was there since the Middle Ages. 32 kilometres of a new motorway will be built, and the current section of 16 km length will be expanded by two lanes in both directions.

The newly built section of the D4 motorway will offer travel on a road that meets all the criteria of safety and comfort and modern technological parameters. While the motorway itself will run along a new route, the link between Příbram to Písek follows one of the oldest trade routes in the country. It is part of the so-called Salt Trail, also known as the Golden or Passau Trail. It was the south-western link between Prague and the Pošumavi region, where the trail split to cross the Šumava forests and led to Passau, an important medieval transport hub on the Danube.

Archaeological finds suggest that the trail was used probably as early as the Bronze Age. The first written mention of the trail dates back to 1010 when the German king and later Holy Roman Emperor Henry II donated toll fees collected on the route to Bohemia to the convent in Passau. The first Czech king, Vratislav II, followed the example in 1088 when he donated toll fees from this “medieval highway” to the Prague Vyšehrad Chapter. The trade was lively here – mainly salt from Salzburg and Bavaria, spices, wine, southern fruits, and precious substances were transported to the country, while hops, beer, honey, and leather were sent to Bavaria from the Czech lands. A report on one such cargo survives from 1373 describing a merchant from Salzburg being robbed by a certain Pavel Divočák near Prachatice who “took his pepper, saffron, ginger, bokassin [Italian cloth], paper, and other merchant goods”.

In the 14th century, the traffic on the Salt Trail was already so great that Charles IV had parts of it paved. Thus, in a way, the “Father of the Homeland” stood at the birth of local building construction. The Salt Trail experienced the biggest boom under the last of the Rosenbergs. At that time, up to 200 pack animals passed through Prachatice every day, which were horses loaded with bags or barrels (so-called prostices) on their sides accompanied by merchants walking on foot. One barrel contained 55 kg of salt. During its heyday, horses carried to Bohemia by the Salt Trail up to 4,000 tonnes of salt every year, which was used in the Middle Ages not only as a flavouring but also as a preservative for curing meat and fish. A fully loaded pack animal could travel a maximum of 30 kilometres a day (only half in the difficult Šumava terrain), which made the journey between Passau and Prague a two-week effort.

The Salt Trail was constantly repaired and improved over the centuries with new bridges, embankments, and forest clearings, and pack animals were gradually replaced with wagons that could carry up to a tonne of cargo. The decline of the Salt Trail was brought about by competition in the 19th century, when the “white gold” was also heavily imported, for example, from Saxony or Austria. And, of course, with the arrival of the railway. From 1832, a horse-drawn railway ran between Linz and České Budějovice, which greatly reducing the time of transportation and making it more efficient. 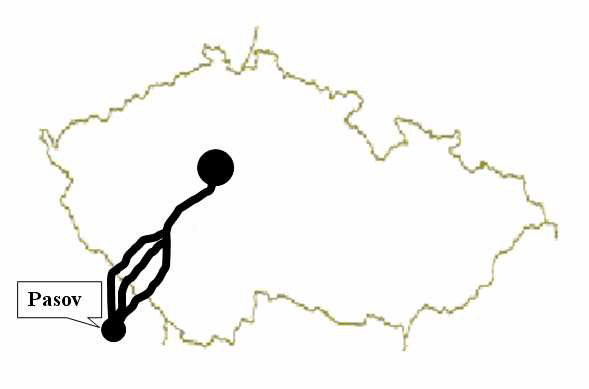 Although the original Salt Trail has now been covered with the asphalt of today’s regional roads, a reminder of its significance to this day is the route of the newly built section of the D4 motorway with many buildings recalling the times of lively traffic on this important trade route. This includes, for example, the Chateau Čimelice, originally a 15th century yeoman fortress. This Baroque chateau itself has a turbulent history. It belonged to the Schwarzenbergs since 1842 and was later confiscated by the state in 1948. During the socialist period, the chateau housed the Secondary Industrial Film School, and since 1993, it again belongs to the Schwarzenbergs, who have been gradually renovating it. The Zvíkov Castle, which was founded in the 13th century by the Přemyslid dynasty as a fortress guarding the roads to Linz and Passau, is another silent witness to the golden age of the Salt Trail. The list should also include the royal town of Písek built in the Middle Ages at the site where the Salt Trail crossed the Otava River.

December 2024
Commencement of Operation and Maintenance

complete length of the rehabilitated and new sections

allowing for migration of wildlife

road pavement on the new sections

monitoring cameras for the sections

to be demolished and replaced

of asphalt on the new sections

camera coverage of the new motorway